Seven Corners Printing is a full service commercial printing company. We pride ourselves on being able to handle your needs from concept to delivery, and every step in between. 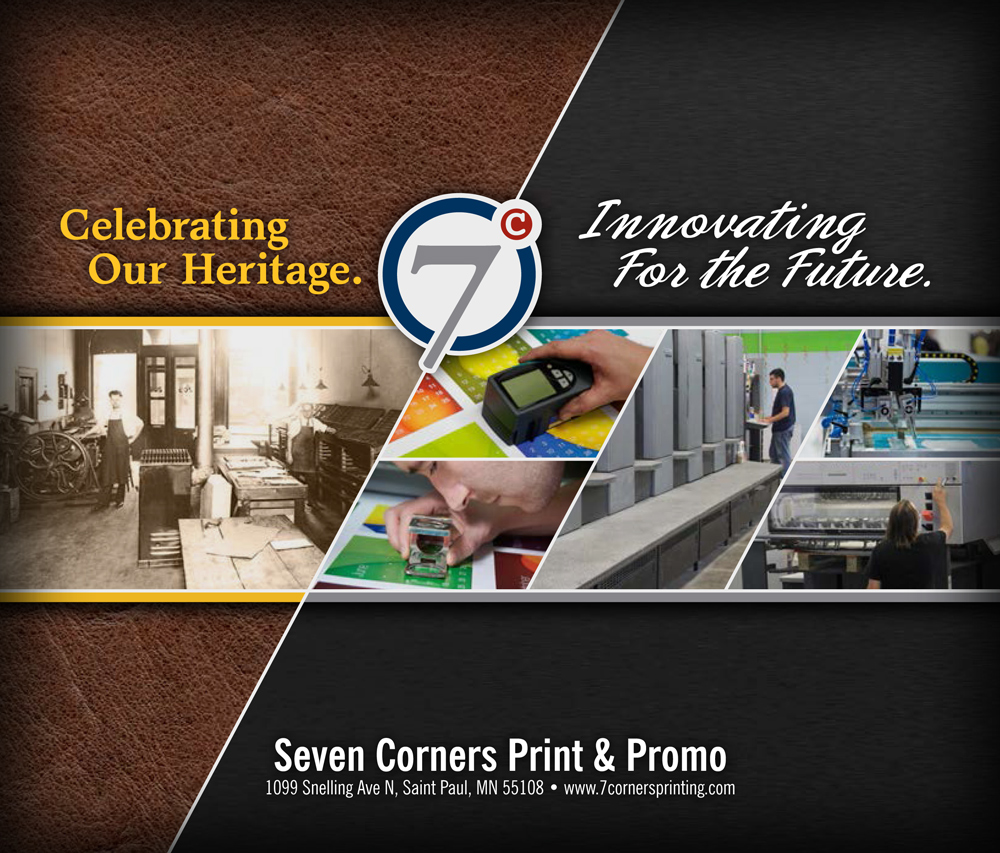 Many of our peers in the industry tell customers and potential customers how proud they are that they have been in business for 10, 15 or even 20 years.

While we are pleased that they are proud of their relative longevity, especially in light of the turbulent times that the printing industry has endured over the past few years, we are equally proud that we have been in business for over 100 years. Being one of St. Paul’s most established commercial printers does not, by itself, make us successful but it does speak volumes that we have been fortunate to have decades-long relationships with customers. Any business that has been around for as long as we have will tell you that there is one and only one reason why they have remained in business for so long: Customers. Without satisfied customers we would have gone out of business during one of the dozen or so downturns in the economy.

The details of Seven Corners Printing History from 1913 to 1970 were provided by Arnold E. Gautschi in a hand written letter dated July 8, 1986. The following is largely what Mr. Gautschi wrote with a couple minor additions.

On approximately May 1, 1924 the Forepaugh Building was sold and was to be remodeled requiring all tenants to vacate within 30 days. Over Memorial Day weekend we moved diagonally across Seven Corners (the actual intersection which created “Seven Corners”) to 340 Main Avenue at Fourth Street, 2nd floor or what is now known as Kellogg Boulevard.

On March 1, 1925 John A. Johnson passed away and Seven Corners Printing was operated/owned by his estate until March 27, 1926. That is when Arnold Gautschi and Holger H. Youngquist formed a partnership and purchased the company.

During Memorial Weekend of 1931 we moved again. Like the last move it was diagonally across the seven corners intersection to the first floor of the Julia Elbel Building at 208 West 4th Street and 209 West 3rd Street. The shop was located in a triangle shaped building that had frontage on both 3rd and 4th streets. This unique building was demolished with when the Civic Center was built.

On August 15, 1933 during the worst of the depression, Holger Youngquist sold his share of Seven Corners Printing to Arnold Gautschi. Mr. Youngquist remained with the company as a pressman until October 1968 when he passed away after being in the hospital for 12 days with heart trouble.

During 1953 Julia Elbel, the building owner, passed away and the building was sold to new owners who raised the rent. The increase in rent and the lack of parking for customers prompted a move over Thanksgiving weekend to 230 West 7th Street; The present location for Seven Corners Printing.

In 1964 Arnold Gautschi hired a young, energetic typesetter by the name of Joe Costa. Six years later on March 1, 1970, Arnold Gautschi sold the company he had owned for 44 years to Joe Costa. Mr. Gautschi retired after 56 years in the printing trade with 48 years and 7 days of it spent at Seven Corners Printing. With help from his wife Lorraine, Joe purchased one of the most established printing businesses in St. Paul. Joe would sell and do the typesetting while Lorraine helped keep the books straight and worked in the bindery area. In addition to Joe and Lorraine there was one fulltime employee who was the pressman that printed everything that Joe sold and designed.

Over the next few years Joe and Lorraine grew Seven Corners Printing carefully and thoughtfully while raising their two children, Debbie and Michael. Through the 70’s and into the 80’s Joe continued to sell and set type and added employees to keep up with the increase in sales and Lorraine continued to keep the majority of the books. As Joe added employees and equipment to keep up with demand, he also needed to add to the building to house the additional employees and equipment. Joe has put two additions on the building and has purchased additional property adjacent to 230 W. 7th Street to address the same problem that prompted Mr. Gautschi to move from the Elbel building in 1953; Not enough parking. Seven Corners remained one of the few successful business on West 7th Street during the late 80’s through the mid-90’s as the Civic Center became obsolete and prior to the Xcel Center being built. With the re-emergence of 7th Street over the last few years, parking again has become an issue that all of the area businesses are trying to solve.

Seven Corners Printing grew from 2 employees in the early 70’s to about a dozen employees (about the same number that is working there now) in the early 90’s and had found a niche in the printing industry that continues to prove successful today. Joe also helped former employees build their own businesses in the printing industry. In the early 90’s Greg Valahala left Seven Corners to take over Parkway Printing on Payne Avenue where successfully serves a niche in the printing industry as well as routinely doing contract work for Seven Corners. At about the same time, Joe and Lorraine’s son, Michael, purchased Concord Printing, on Concord Avenue and, following in his father’s footsteps, Michael has added jobs in St. Paul as Concord Printing continues to grow.

In January 2003, Dan Winter purchased Seven Corners Printing becoming only the 3rd owner in over 70 years. Dan brings 15 years of experience working with customers as well as leading a marketing department where he was a customer of the printing industry. Dan was fortunate to find a company like Seven Corners Printing where the employees have been committed to meeting customer expectations for over 90 years. And, as a customer of the industry and after working with a number of printers in the Twin Cities, Dan understands what is important to his customers.

Seven Corners Print & Promo has been in business since 1913 and, thanks to our loyal customers, we are fortunate to have experienced much growth over the past 10 years.